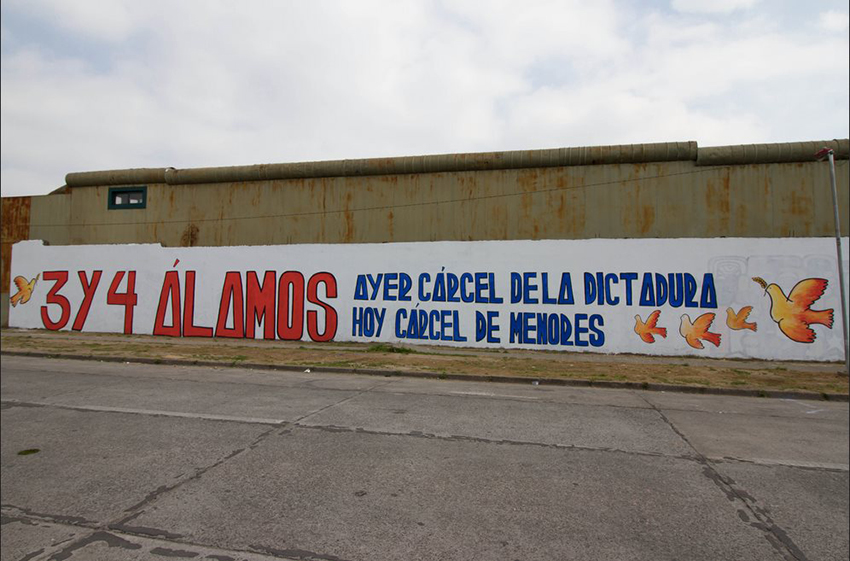 While I am still struggling to show my project “Torture is not talked about” in Germany, a major step forward has been taken in Chile, namely a 200-metre-wide mural painting on the walls of the junta’s former prison called “3 y 4 Alamos”.
When I visited this place in October 2016, another wall painting
„Yesterday a military prison, today a juvenile prison“
had shortly before been removed by members of the gendarmerie. (see photos 1 and 2)
In conversations with survivors of the prison the idea was born to paint a mural, and my friend, the artist Ian Pierce “Ekeko” immediately offered to design it. After several months many survivors, pupils, students and residents living in the area had painted a 200-meter-wide mural which is much more than a mere political slogan, it is an artistic outcry to preserve the historic importance of this place. (see photo 3)
This mural painting will be officially unveiled on 29th April 2017.
Thank you to Sharía Sepulveda (survivor) and Ekeko for their cooperation and of course a great thank you to all those who helped.
For my part I am looking for an institution or a gallery willing to show my project “Torture is not talked about” in September 2018, the 45th anniversary of the military coup in Chile.
Looking forward to receiving offers …